Back to all posts

We have been on the charts for nearly a year in Boston, and want to thank everyone for the support.  With your support we finished with the second most requested song on 2016!!  We have finished as the most popular band 3 months running according to the fan polling from the Graveyard shift radio show.  We received 69% of all the votes for the 100 bands involved. You are the most supportive fans there was nearly 10,000 votes cast and with only one vote per day you all participated fully. We also charted at #8 in Canada last week with our single Beware the Fluffer.   Our label has landed Dan Simon to do our fall CD's artwork so mostly things are really positive.

Sadly, Joe Hayes has to leave the band to deal with a family situation and we wish him all the best and it will be very hard finding a player with his personality and skills. Thank you for everything Joe!! 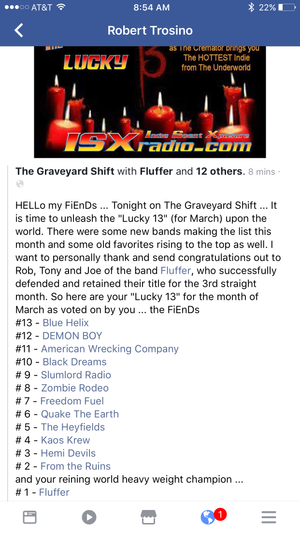